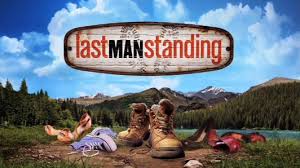 Last Man Standing is a sitcom starring Tim Allen. It has been on for 5 Seasons, starting in 2011. I didn’t know Tim Allan had a new sitcom until 2012. I caught it on TV one night in Green Valley Ranch. Then I watched it a few times while living in Golden. It was moved to Friday nights and I usually worked Friday nights, so I rarely got a chance to see it. I watched it some last season and discovered Ray enjoyed it as well. This Christmas, I was bored with TV,  so I watched Last Man Standing on Netflix. 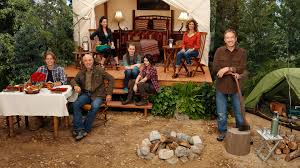 sociaCurrently, CMT airs re-runs. I guess CMT picked it up because it appeals to Country-Loving Conservatives. Tim Allen’s character Mike Baxter is a Libertarian like Ray. He frequently makes comments about loving guns and hating Obama. He complains about Liberals and Socialists. Though I don’t always agree with him point of view, I like the show. There is a focus on family even though politics play into the plots. The writing can be clever, especially when they use Ryan as a foil for Mike.

Home Improvement, which ran from 1991 to 1999, reflected the changing roles of men and women in society. Tim “The Tool Man” Taylor was into tools, hot rods and “more power.” Tim was often showed as trying to understand women and become more sensitive, which is what society was demanding of men in general. He used Tool Time to examine these ideas in a fun and humorous manor. The show might have poked fun at pop psychology and fads, but it felt like the show held women in high regards. 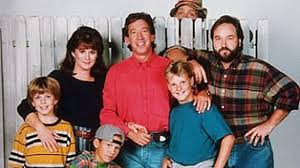 Last Man Standing reflects the time we live in now, which is different than in the 90s. Our era is much more conservative, with War, Government and the Military being the hot topics today. Instead of trying to raise three boys to be strong and yet sensitive, he is raising three girls to be strong and yet feminine. Eve is into guns and the outdoors like her father Mike, but she still has deal with girl problems. Mandy is the stereotypical airhead into fashions and Kristin was a teen Mom. 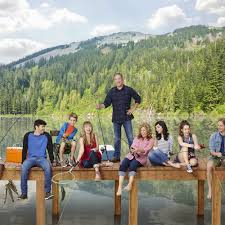 During the 90s Allen was in his 40s. His TV sons were school aged. Now Allen is in his 60s. His TV daughters are teenagers and young adults. Though this would have put him in his 40s when he became a father, it still works. His TV wife in Last Man Standing is 10 years his junior, where as his TV wife in Home Improvement was roughly the same age as him. 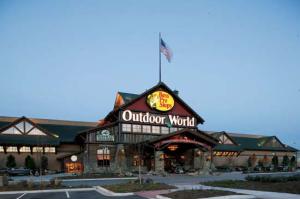 Anyway, Home Improvement had been set in Detroit, Michigan, where Allen grew up. It had a nice Midwestern feel to it, which I related to since I am from Ohio. Last Man Standing is set in Denver, Colorado, where I also used to live. I can relate to that as well. Outdoor Man is essentially Bass Bro. I swear they use the front of Bass Pro (Aka Outdoor World) there off of I-70 by where we used to live and just photo shopped the Outdoor Man logo on it.

Reading and writing and writing about reading are my passion. I've been keeping a journal since I was 14. I also write fiction and poetry. I published my first collection of short stories, "Radiant Darkness" in 2000. I followed that up with my first collection of poetry in 2001 called "Journey without a Map." In 2008, I published "Persephone's Echo" another collection of poetry. Since then I've also published Emotional Espionage, The Way The Story Ended, My Perfect Drug and Out There. I have my BA in English from The Ohio State University at Mansfield and my MA in English Lit from The University of North Carolina at Greensboro. I also have my Post BA Certificate in Women's Studies. I am the mother of two beautiful children. :-)
View all posts by carilynn27 →
This entry was posted in Culture, Feminism, Literature/Pop Culture, Movies/TV and tagged 10s, 3 Boys, 3 Girls, 40s, 60s, 90s, ABC, Airhead, Bass Pro, Baxter, Boy, Brad, CMT, Colorado, conservative, Daughters, Denver, Detroit, Elementary School Age, Eve, fads, Fashion, femimine, Foil, Gender Roles, Girl, Government, Guns, Home Improvement, Kristin, Last Man Standing, liberal, Mandy, Mark, Michigan, Mike Baxter, Millitary, More Power, Obama, Outdoor Man, Outdoor World, pop psychology, Raising, Randy, Ryan, Sensitive, socialists, Sons, Strong, Teen Mom, Tim Allen, Tool Time, TV Wife, War, Young Adults. Bookmark the permalink.