Mother of Children, Mother of Two, Mother of Kittens, Mother of Dragons. This week culminated into Mother’s Day and a celebration of mothers everywhere. That night we watched Once Upon A Time. Killian chose to stay in the underworld, much to Emma’s dismay. In the Game of Thrones Jon Snow was resurrected from the dead Lazarus style.

We watched Game of Thrones, “Oathbreaker.”  Bran Stark is Neflixing visions of the past in his magical tree. The three-eyed raven is playing the Ghost of Christmas past. We saw a young Ned Stark fighting at The Tower of Joy to save his sister.  The vision seems to hit that Lyanna and Rhegar Targaryen had a child together before she died and that it is none other than Jon Snow.  Some fans thing Rhegar and Tyrion’s Mother also had an affair, thus making Tyrion half Targaryen. He does have a gift. The dragons didn’t eat him when he set them free last week. 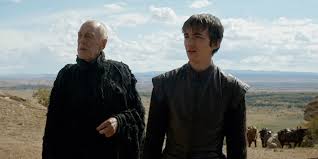 We also saw Jon return and hang those who had murdered him.  He then gave up his post at the Night Watch.  The questions is: Where will he go? Will he go to Winterfell and save his brother Rickon who is now a prisoner of Ramsey Bolton? Will he run into his half-sister (or cousin?) Sansa on the way there?  It would suck if she got up to the Wall and he was all the way down at Winterfell. 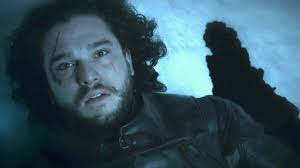 As a writer, I am pretty sure all the plots will converge.  The question is how.  How will Bran’s visions and Arya’s assassin skills play into the final events? It occurred to me not long ago the book series is called A Song of Fire and Ice because the final battle will be between the White Walkers—ice—and the dragons—fire.  Assuming the Dragons win, who will sit on the Iron Throne? Daenarys? Tyrion? Jon Snow? Or someone else? Will a Stark regain and rule Winterfell?

Daenarys is not only known as The Mother of Dragons, but the Unburnt as well. Why? Because she stepped out of Khal Drogo’s funeral pyre unburnt. And, most recently, she stepped out of the Dothraki temple untouched by the flames.  This time, she burned the place down with all the Dothraki leaders inside, thus regaining control of the situation. Being immune to fire is an awesome power to have.

Too bad poor little Shireen didn’t have this power. She was burned alive in the Season 5 Episode, “Dance with Dragons.”  Her death came back to me this week as I burned papers in the field.  Standing next to the orange flames and feeling the intense heat, I thought about how horrible it would be to die by fire.  The pain would be unbearable I’d imagine. Fear filled my heart as I tossed more papers into the fire.

Sacrificing a little girl to the flames in order to insure victory in the coming battle is sheer madness.  Her death was as tragic and pointless as any in real war.  It broke my heart to watch, but the scene didn’t turn me off The Game of Thrones though. It is one of the most realistic fantasies ever written, and that is something. 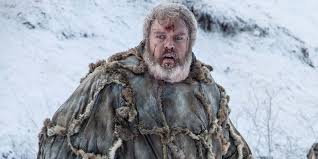 At 8pm, Ray and I sat down to watch Game of Thrones.  “The Door.” Was incredibly sad, but overall it was an excellent episode.  As Sansa, John and Davos planned their attack on the Boltons, Bran is attacked by the White Walkers.  We discover that the Children of the Forest created the army of the Undead to destroy the humans who were cutting down their sacred trees.  But like an out of control AI, the White Walkers threaten the Children was well.  Bran’s escape via Hordor reveals his ability to time travel or affect time at least. Hordor is short for “Hold The Door.” Bran is in the past and in Hordor at the same time. He more or less creates the fit that takes away Hordor’s mind while letting the White Walkers kill him so he can get away.  Hopefully, Bran will come into his own and use his ability to destroy the White Walkers once for all!

Reading and writing and writing about reading are my passion. I've been keeping a journal since I was 14. I also write fiction and poetry. I published my first collection of short stories, "Radiant Darkness" in 2000. I followed that up with my first collection of poetry in 2001 called "Journey without a Map." In 2008, I published "Persephone's Echo" another collection of poetry. Since then I've also published Emotional Espionage, The Way The Story Ended, My Perfect Drug and Out There. I have my BA in English from The Ohio State University at Mansfield and my MA in English Lit from The University of North Carolina at Greensboro. I also have my Post BA Certificate in Women's Studies. I am the mother of two beautiful children. :-)
View all posts by carilynn27 →
This entry was posted in Literature/Pop Culture, Movies/TV, Uncategorized and tagged AI, Arya, Assassin, Bran, Brianne of Tarth, Cari Lynn Vaughn, Children of the Forest, Daenarys, Davos, Death, Direwolf, Dothraki, Dragons, Faceless God, Game of Thrones, Ghost, Greenseer, Hordor, Ice and Fire, Iron Throne, Jack Bender, Jon Snow, Khal Drogo, Lannister, Lost, Lysanna, Mad King, Murder, Ned, Night Watch, Prisoner, Ramsey Bolton, Rhegar, Rickon, Sansa, Season 6, Shireen, Stannis, Stark, Summer, Targaryian, The Door, The North, The Oathbreaker, Three Eyed Raven, Time Travel, Tower of Joy, Tyrion, Unburnt, white walkers, Winterfell. Bookmark the permalink.