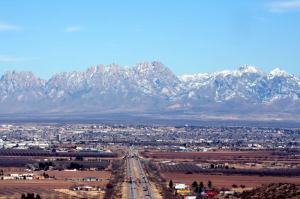 Las Cruces is the City of Crosses.  It is 3,908 feet above sea level.  The Rio Grande provides the Mesilla Valley with water for agriculture.  It has an estimated population of 101,643. It is 56% Hispanic or Latino, which makes sense since it was under New Spain’s control and then was a part of The Mexican Empire. It finally became part of the United States in 1848-1849.  My Dad didn’t move here until 1986 though—140 years later. 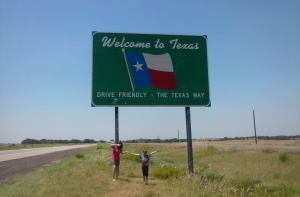 We hit the road about 7:15am. I stopped at the first exit off I-44 to get gas. With a full tank of gas, we passed through Joplin and into Oklahoma. We got to Tulsa by 9:30am.  Then we continued on into Oklahoma City. We got on US-40 and stopped for lunch in Yukon.  We arrived in Amarillo, Texas, but 3pm.  It was 105 degrees out at that point.  It was way too hot! We checked into Wyndam Gardens and the kids swam in the indoor pool.  We ordered a pizza from Papa John’s at about 5pm and chilled. 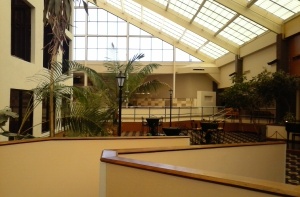 The next morning we grabbed our breakfast snacks from the gift shop and headed out. It wasn’t until we were on the road an hour or two that I realized I was missing my toiletries bag.  I called the hotel and asked if I left it behind.  Sure enough, I had left it on the bathroom counter. 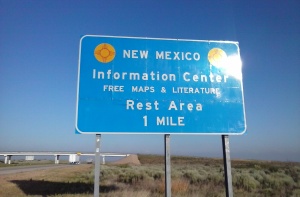 Anyway, we followed I-40 out of Texas and into New Mexico.  Then we were supposed to get onto 60 West and 54 South. I missed my turn outside of Vaughn, New Mexico, and ended up taking 60 West all the way across to I-25 South.  It added like an extra hour to our drive, which frustrated me.  Not to mention driving in the middle of nowhere was nerve-wracking. There was miles and miles of nothingness where even 100 miles an hour feels like a slow crawl.  We stopped and ate in Socorro. I was hungry at 11am, but there was no place to stop until after 12 noon.  It was about 1pm when we got back on I-25 South and drove the last hour and half to Exit 19 for Radium Springs.  We found Dad’s house around 2:30pm. 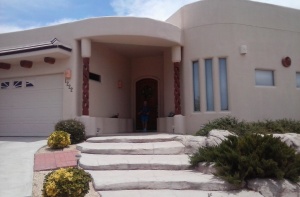 Dad was in El Paso picking Linda up from the Airport. Lana was home though, so we went inside and cooled down. It was 105 degrees out again and climbed to around 110 degrees before cooling off.  While we rested, Carol and Sam showed up with Dino, Robin and Emily. Then Tom, Mary, Keri and Olivia arrived. Finally, Dad arrived with Lynda.  Norm and Jim won’t be here until tomorrow.  No one else could make it this year.  At about 4:30pm, Dad led all of us from his place to the rental house in Las Cruces.  The house was huge and very nice. It is all one floor with four bedrooms, three bathrooms, a living room and a family room.  It even has a pool! So we all ran to Walmart on North Ridge and returned to get ready for bed. 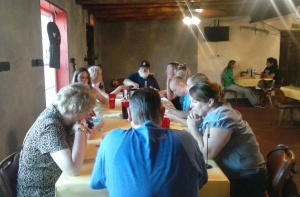 Monday, all of us took some time to relax.  The kids played in the pool, watched TV and played Play Station.  That night we drove to Habanero’s to eat Authentic Mexican food.  It was kind of expensive and spicy, but all very good.  Mostly, I enjoyed talking to everyone.  We swung by Baskin Robin’s for Ice Cream. 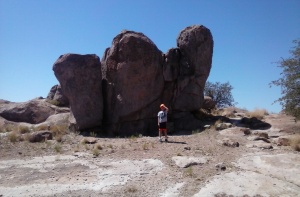 I drove Norm on Tuesday when we left City of Rocks. I knew it was in the middle of nowhere, but I didn’t realize it was 1 ½ hours away. I do remember visiting it back in 1988, but I was 12 and I didn’t pay attention to the drive there really.  I just remember Andrew getting lost. Dad, Lana and I had to look for him.  He was sitting calmly in a cozy spot between the rocks.  This time I explored the alien-looking landscape with Ana and Sebastian.  Though we arrived before noon, it was still really hot out. After we ate, we explored, saw Dad’s observatory and then left. That night Mary and Keri grilled Chicken, Hamburger and Hot Dogs for everyone. 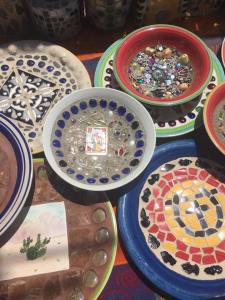 Wednesday Dori came over. Carol, Mary, Lynda and Keri watched Alessandro while we went to the Farmer’s Market downtown on Main Street.  Dori drove my car because it had air conditioning and I didn’t know where I was going.  Anyway, there weren’t very many vendors and it was really hot out by noon.  We browsed a bit, but the kids complained about the heat—Sebastian in particular.  After the Farmer’s Market we hit the COAS bookstore. They have more than 200,000 books there! I could spend all day there, but Sebastian was Hangry. We got a couple of things and left.  We ate at McDonald’s and came back to the house to swim.  Dori relaxed while we played with Alessandro. Dori left. I spoke to Lynda, Carol and Norm. 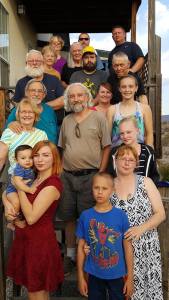 Later that night I drove Norm over to my Dad’s place. Lana cooked wings, ribs, rice, potatoes and salad. We ate buffet style once it was all ready. A couple of hours later, Lana presented everyone with a cookbook and then they sang Happy Birthday to Sam and I. Sam will turn 80 soon and I will turn 40 on Monday.  Lynda gave me a card with a necklace. It was a Phoenix she’d bought for her Mom—my Grandmother.  Now she was passing it on to me.  Carol and Robin each gave me a card and some cash, which I was very thankful for!  Finally, at 9pm, I drove home to the vacation house. I went by myself, so I was nervous. I found my exit—Lohman—but then I turned onto Teshor instead of Foothills. I turned around and used my GPS to get back to the house.  It helped for the five minutes or so that battery lasted.  We came in, Ana ate food from the plate of food that I had brought for her and we all went to bed. 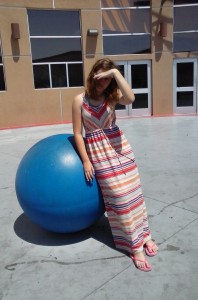 Today we slept in and got ready around 11am and left for the Cineport Theaters by the Mall.  It was the same theater that Dad took us to when we went to see Kung Fu Panda 2 back in 2011.  Dori met us there and we saw Finding Dory, which was cute.  Then, after the movie, we explored the Mall a bit. Dori left and then we left shortly thereafter. When we got back to the car the thermometer said it was 112 degrees out. As we drove, it dropped to 106.  Once back to the vacation house, I posted pictures to facebook, talked to Carol and Lynda. Then I finished watching the new season of Orange is the New Black. 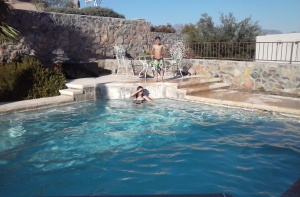 Friday was our last day in Las Cruces. We ate leftovers, did laundry and packed.  The kids swam and watched TV while the adults prepared to leave. Dad went to see Independence Day 2: Resurgence with Andrew, Dino and Mario.  Dori came over and swam with Alessandro.  Mario also swam when he returned. 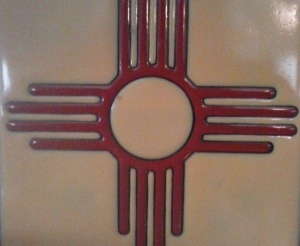 So, Saturday morning we got up around 7:30am and left the vacation house around 8:15am.  Everyone else left around 9am for the Breakfast at IHOP.  I went the long way around to get to I-70, but I did get to it.  We sped along the highway North into the mountains. After an hour or so, we came to the White Sands National Monument.  Sebastian begged me to stop.  We drove into the park and continued on into the dune area.  The kids got out and climbed a dune before we got back in and took off.  I didn’t want to spend much time there, so we drove on to Alamogordo, where we hit McDonald’s for 2nd breakfast. 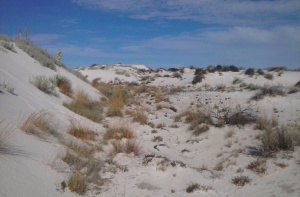 Eventually, we got onto 54 North and drove through the middle of nowhere.  Hours passed as we headed up to Vaughn, New Mexico.  Then it was another hour to Santa Rosa, where we got gas and ate at Subway around 12:30pm.  After lunch, we continued on I-40 into Texas, and finally, the city of Amarillo. 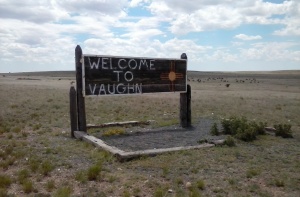 exited at exit 72 and swung by Wyndam Gardens to get my toiletries bag. I got it and back tracked to exit 68 to Super 8. We checked in and unloaded the car. I was tempted to take the kids to Red Lobster, but we were on a budget. I took them several miles down the road to Fazzoli’s. I got a Sampler, Ana got Twice Baked Lasagna and Sebastian got Fettuccine Alfredo. It was all very good. Then we swung by Barnes and Noble.

Anyway, all went well except I went the long way around inside of Oklahoma City. The kids were fighting and I missed my exit at I-35 North, but I eventually found I-44.  Everything felt further away than I had originally thought, but that was okay. 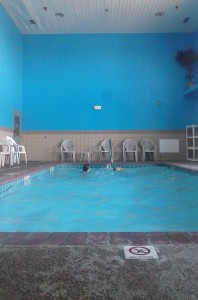 That afternoon we stopped at McDonald’s for lunch. It was about 1pm.  Then we made it into Tulsa.  Once downtown, we hit a traffic jam.  Three lines of traffic were merging into one.  We dropped from 70 miles an hour to like 10 miles an hour max.  At 2pm or so, we sped away from Tulsa toward Joplin.  It was then I realized that I was on E.  I had to wait until exit 3 inside the Missouri border before I could refuel.  We arrived home around 4pm. It was a long drive, but a great trip.  Overall, I was glad to be home though. 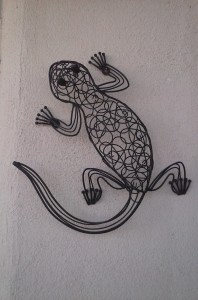 Reading and writing and writing about reading are my passion. I've been keeping a journal since I was 14. I also write fiction and poetry. I published my first collection of short stories, "Radiant Darkness" in 2000. I followed that up with my first collection of poetry in 2001 called "Journey without a Map." In 2008, I published "Persephone's Echo" another collection of poetry. Since then I've also published Emotional Espionage, The Way The Story Ended, My Perfect Drug and Out There. I have my BA in English from The Ohio State University at Mansfield and my MA in English Lit from The University of North Carolina at Greensboro. I also have my Post BA Certificate in Women's Studies. I am the mother of two beautiful children. :-)
View all posts by carilynn27 →
This entry was posted in Event, Travel and tagged 1988, 2011, 2016, Alamagordo, Amarillo, Arizona, Aunts, Car, Cari Vaughn, Cineport, City of Rocks, Civil War, COAS Bookstore, Dad, Dry Creek, Facebook, Farmer's Market, Fazzoli's, Finding Dori, Foothills, Gilkison Family Reunion, Grandkids, Habanero's, Heat, Hot, I-25, I-35, I-40, I-44, I-70, IHOP, Independence Day: Resurgence, Joplin, Kids, Kung Fu Panda, Las Cruces, Mall, McDonalds, Mexican Food, Mexico, Missouri, New Mexico, North, Observatory, Oklahoma, Oklahoma City, Orange is the New Black, Phoenix, Play Station, Pool, Radium Springs, Red Lobster, Road Trip, Rt. 66, Santa Rosa, Socorro, South, Subway, Summer, Super 8, Swim, Teshor, Texas, Theater, Traffic Jam, Tulsa, Uncles, Used Books, Vacation House, Vaughn, White Sands, Wyndam Gardens. Bookmark the permalink.