The Age of American Unreason

The Age of American Unreason 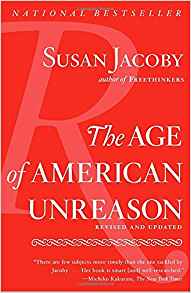 Jacoby points out that more than half of the founding fathers of this country were college educated. And Benjamin Franklin was largely self-educated and incredibly intelligent despite not being college educated.  In 1776 Thomas Paine wrote Common Sense, which was a huge influence on the ideas that shaped our government.

Then, in the early 1800s, Anti-Intellectualism crept into our culture. There was a backlash against Paine coming from the ultra-conservative religious right. The debate between Science and Religion took hold.

Slowly, things shifted and by the 1870s-1890s, the wealth of the United States allowed for more opportunities.  During the “Gilded Age” lectures were seen both as educational and entertaining. The Literacy Rate rose as libraries and museums were funded, built and available to the general population.  Publishers of books were able to print cheap copies of books, thus landing more books into the hands of the American public.

Then World War I came along. Afterward, there was a wave of interest in Socialism and Communism.  Intellectuals embraced these ideas, but because they were the ideas of our enemies, intellectuals were deemed unpatriotic.  If Intellectuals didn’t support American Capitalism and Democracy, then they were turned into unfavorable or undesirable. Sometimes they were even considered a threat—treasonous even.

By the 1950s, Liberals tried to distance themselves from Communism.  One could be a Communist Liberal or Non-Communist Liberal. Though being a Liberal was looked down upon, being a Communist was something that could get you arrested during the McCarthy Era.  The McCarthy hunt for Communists in America has often been compared to the Salem Witch Trials.

It was during this time that culture was divided into High Brow, Middle Brow and Low Brow.  High Brow reading might include the likes of Virginia Woolf and other Literary Classics. The Middle Brow became a combination of Literary and Bestseller.  The Middle Brow Book-of-the-Month Club included such authors as Howard Fast, Irving Stone, J D Salinger, Phillip Roth, Willa Cather and Richard Wright.  Though the Book-of-the-Month Club peaked in the 1950s, it began in 1926 and ran into the 1960s.

The 1960s is often known as the De-Mythologizing Decade. Allan Bloom’s book The Closing of The American Mind talks about the changes in education during this time. College was now available not to just the rich or elite, but to the working class as well. Many soldiers utilized that GI Bill.  Women were also encourage to go to college, but not because they could find a career and make a living. No, they were told it was good for them to be able to educate their children once they got married and had them.

Although there were students who were Far Left Liberals and students who protested the war in Vietnam during the 60s, they made of the minority of the student body in colleges.  Right Wing administrators sought to squash the protests. There Campus Crusades held by Bill Bright and others to encourage “proper” behavior.  Many college students were, in fact, Conservative Christians.  By 1968 the Republican Party was mostly made up of Conservative Christians.  Richard Nixon acknowledged this and ran his platform accordingly.

Pop Culture dominated the 1960s. Pop music and an obsession with television and movies also surged during this time. Different Generations often wore different clothing, but by the 1970s, parents and children were all dressed in jeans. Jacoby mentions a trip to Russia that she took in the 60s. Pop Culture didn’t exist there like it did here. Everything was serious and the mainstream music was still classical.

Regan was elected in the 80s. He declared that America was “God’s Country” and began us on a path to a Theocracy despite the Founding Father’s idea of the Separation of Church and State.  While it okay to be Christian and practice that Faith, it is not the only religion of the United States.  People tend to forget that Christianity is only one of many embraced by the Constitution and its Amendments.

Today was deal with Junk Media and Junk Science and Junk Thought. Jacoby gives a number of examples what she considers to be popular ideas not validated by Science.  There is the idea that Girl Brains and Boy Brains work very differently for one. Jacoby mentions Cristina Hoff Summer’s book The War Against Boys: How Misguided Feminism is Harming Our Men. She also talks about the Anti-Vaccination movement because of the idea it causes Autism. There is also the controversy surrounding people who deny Climate Change.

The worst culprit of Unreason is the Fundamental Christian movement. Jacoby names Pat Robert’s 700 Club, The Left Behind Series and those who would deny Evolution as examples of religion being unreasonable. The Literal Interpretation of the Bible flies in the face of modern day science and all that is considered “reasonable.” The mainstream media is so Christian that they suppress authors like Richard Dawkins, who is a stout atheist.

One of the largest problems is the prevalence of Television and the Internet in every American home. We are all distracted by so-called Reality TV. Since the 1950s people have read less and watched TV more, which is a large part of the reason America has been “dumbed down.”

TV, Radio and the Internet have also allowed people like Ann Coulter and Don Imus to be given an outlet to their views and opinions. And while the idea of free speech is good, it is downright tragic that their views include prejudice and racial slurs that they utter in public.  Imus called black women, “Nappy Headed Hos” and Ann Coulter called Muslims “Rag Heads.”

In fact, American’s use of the English Language is downright shameful. We are way too casual and use too much slang.  Calling everyone “Folks” instead people and calling soldiers “Troops” is not just lazy.  It shows a blatant disregard proper English as well.

Jacoby points to the American President as an example of Anti-Intellectualism. Americans don’t want a President that is too different from them. Though Clinton was highly educated, he came from a working class background. His Southern Charm played down his actual intelligence in the public eye. George W Bush has repeatedly been shown as not too bright in the media, when he was fairly intelligent.

Americans are not so Ethno-Centric that they refuse to learn a second language. They assume that people in other countries will learn English. We don’t stop to think that it is only respectful to make an effort to try and learn about other cultures and other languages. Most countries boast a large bi-lingual population, but not us—not the US.  If we promoted intelligence, then perhaps we would also promote the learning of other languages as well.

Sadly, 25% of people polled believed that Christianity was our “National” Religion, which it isn’t. 42% of those polled believed that English is the “National” Language as well. It isn’t. And 40% of those polled didn’t have a clear understanding of the role of the Supreme Court, which is to interpret the Constitution. In fact, 98% of those polled couldn’t name the Supreme Court Justice.  It seems we don’t even understand our own history or system of government. Way too many people forget about the very important idea of the Separation of Church of State.

Jacoby offers no real solution to our current problem, but she does feel that supporting intellect, education, creativity and curiosity are the keys to ending our current Dark Age. 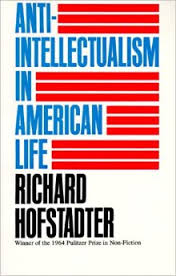 1 Response to The Age of American Unreason