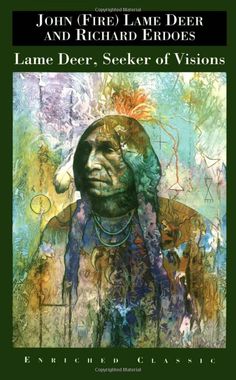 For us Indians everything has a deeper meaning. Whatever we do is somehow connected to our religion.

Indian children are never alone. They are always surrounded by Grandparents, Uncles, Cousins and Relatives of all kinds who fondle the kids, sing to them and tell them stories.

We Indians always say that our kids are our most important possessions, not our cars, our houses, our TV sets. These count for nothings.

White Buffalo woman addressed the women, telling them that it was the work of their hands and the fruit of their wombs which kept the tribe alive. You are mother earth she told them. The task has been given to you is as great as the one given to the great warriors and hunters. Buffalo Woman turned to the children, because they have the understanding beyond their years. Young Indian Children have the right to be treated with the same respect that is shown to grownups.  She turned to the grownups and told them that their children were their greatest possession, that they represented future generations, the life of the people, the circle without end. She told the children to remember this as well and that they were teach their children this when they were grownup.

I was never scolded. Indian kids are handled gently.

The Great Spirit is EVERYWHERE. Sometimes it shows itself through an animal, bird, or some trees and hills.

Grandson, I don’t think they love us more than they love themselves. Some don’t love us at all. ~Grandfather Fox from the 1920s

Maka Tahan Wicasa Wan means I Am A Man of the Earth. Ike Wicasa means that natural humans are free and wild. Cate Ista mean the Eye of the Heart.

For the white man, each blade of grass or spring of grass has a price tag on it. Indians chase the vision. The white man chases the dollar.

The air, the water, the earth—that belongs to everybody. If man wants to survive, he’d better come around to this Indian point of view and the sooner the better.  There isn’t much time to think it over.

If this earth should ever be destroyed, will be by desire—by the lust of pleasure and self-gratification, by greed, the greed for the frogskin.  It will be by people who are mindful only of their own selves, forgetting the wants of others.

Wopila is a thanksgiving for something good that happened to a person.

Before our white brothers came to civilize us, we had no jails, therefore, we had no criminals. We had no locks or keys, so we had no thieves. If a man was so poor that he had no horse or tipi or blanket—someone gave that to him.  We were too uncivilized to set much value on personal belongings. We wanted to have things in order to give them away. We had no money and therefore a man’s wealth couldn’t be measured by it. We had no written law—no attorneys or politics, therefore we couldn’t cheat.  We really were in a bad way before white man came and I don’t know how managed to get along without the basic things, which we are told, are absolutely necessary to civilized society. (Irony or Sarcasm here).

Anything in disharmony with nature is bad art

Richard Erodes said that some of his Indian friends tend to look upon life as a long series of symbolic images forming definite harmonic patterns. They see man not as a separate entity, but as part of the Earth upon which he walks.

There were Sixty Indians who were at Martin Luther King’s speech.

Red, White, Black. These are true colors. We are fascinated with colors for the unity of man—for our white, black and red brothers and sisters.

Let us sit down here, all of us, on the open prairie, where we can’t see a high way or a fence.  Let’s have no blankets to sit on but feet and sit on the ground with our bodies. Let’s sit on the earth that is yielding shrubs as a mattress, experiencing its sharpness and softness.  Let us become like the stones, the plants and the trees. Let us be animals and feel like animals.

Listen to the air. You can hear it, feel it and taste it. Woniya Wonka is the Holy Air.  We sit together and don’t touch, but something is there. We feel it between us—a presence. It is a good way to start thinking about nature and talk about it or to it. Let us talk to the rivers, to the lakes and the wind as our relatives.

You have turned women into housewives and truly fearful creatures. Don’t, don’t don’t! That is crazy!

You live in prisons which you have built for yourselves and call them homes, offices and factories.

American want everything sanitized. No smells. No even the natural smell of men and women.

Your idea of killing is to sit an airplane way above the clouds and press a button and drop bombs and never look below the clouds. That is the odorless, guiltless and sanitized way.  When we kill a Buffalo, we knew what we were doing. We apologized to his spirit and tried to make him understand why we did it—honoring with bones of those who gave their flesh to keep us alive and praying for their return and praying for the life of our brothers and those of the buffalo nation as well as our own people.

To us, life is sacred.

But all animals have power, because the Great Spirit dwells in—even in the tiniest butterfly, even in a flower and even in rock. The modern white man’s ways keep that power from us, dulls it. To come to nature and feel its power is let it help and one needs time and patience for that. You have so little time for contemplation. It is always rush, rush, rush with you. It lessens a person’s life all of that grind—that hurry and scurry.  Our old people say that Indians long ago didn’t have heart problems. They didn’t have cancer. The illnesses they had, they knew how to cure.

During a vision I heard that, “You have love for all that been placed on this earth…You have You are just a human being afraid and weeping, filled with that love. All of nature can fit in there.”

What is life? If you ask a business man, he will tell you that life is a matter of buying and selling things and making money because that is his life from morning to night. The man of ambition will tell you that life is a struggle to achieve fulfillment. For the man who has attained a position of power, who is head of an organization or country, life is full of activity of his own making. For laborers, life is an endless week without rest, it is dirty, miserable and without sufficient food.

In a fight, there is a heightened sense of being alive. We think that struggle in every form is necessary to keep us alive, but you see that kind of living as very destructive.  There is a way of living without that kind of struggle.

Why do we steal? Because society as it is now constructed deprives many people of the necessities of life.  Others steal because it causes excitement.

There is beauty and meaning in life only when the heart is cleansed of the things in the mind—things like useless knowledge.

What is age? It is the number of years you’ve lived.

You see most of us have known love in our hearts. We never look at the stars or delight in the whispering waters. We have never observed the dance of moonlight on a rushing stream or watch the flight of a bird. We have no song in our hearts. We are always occupied. Our mind is always full of schemes and ideas of mankind.

But we have a great sense of privacy, of pretending not to notice. That is very important because we have to make our own privacy where it doesn’t really exist.

Wicasa Waka means a man who feels the grief of others.

Man cannot live without mystery. He has a great need for it.

Imagine darkness so intense and so complete that it is almost solid, flowing around you like ink, covering your body like a velvet blanket. Imagine a blackness which cuts you off from the every-day world, which forces you to draw deep into yourself, which makes you see with your heart instead of your eyes. You can’t see, but your eyes are open. You are isolated, but you know that you a part of the Great Spirit, tied with all living things.

Friend. White people use this word lightly. Many of you don’t know what real friendship is.  The young men who vowed Kola to each other would be almost a single person. They shared everything—life and death, pain and joy, the last mouthful of food, even their women. They had be ready at all times to give their lives for each other.

“Time is like space, it grows and shrinks in unexplainable ways. A lifetime of being, learning and understanding pressed together in a few seconds of insight or time standing still and not moving at all, a minute becoming a lifetime. Think what we can do with such a minute.” Says Leonard Crow Dog.

A Ute holy men came back to earth with sacred knowledge. He told everybody “Don’t hurt human beings. Don’t fight. My ghost dance is a dance of peace.”

Not the old ghost dance, not the rolling up of the ancients, but a new spirit, not only among the Indians, but among the whites and blacks too—especially among the young people. It is like raindrops making a tiny brook, many tiny brooks, a stream, and many streams. Making one big river bursting all the dam. Us talking like this—those are some of the raindrops creating the brooks.

Now, not only Indians aren’t the only endangered species. All of human kind is endangered.

There is a light man coming and bringing a new light. It will happen before this century is over. The man who has power will do good things too.

I think we are moving in a circle, or maybe a spiral, going higher each time, but still returning to the same point. We are moving closer to nature again. I feel it, you feel it.

You are an artist and therefore, can look beyond what is peddled to us as reality. You were confused by the white man’s religion as we were. When, as a boy, you spent hours in the crotch of a tree or when you felt more at home with the animals than the people that it was kind of a vision quest. Maybe it wasn’t much, but it was something. If you are also picking up odd and ends shaped pebbles or fossils, saying that you do because it pleasure you, but I know that deep inside you that there must be an awareness of the powers of the rock, of the spirits inside them, otherwise you would not pick them and fondle them like you. Your coming here to read this was no accident either…