Play It As It Lays shows a preoccupation with existentialism. She examines the nothingness of the void as in Sartre and Camus—particularly The Myth of Sisyphus.  Kierkegaard

She does not think in terms of abstracts or didn’t at least. As an undergraduate a Berkley, She tried to think in abstracts.  She was focused on the flowers rather than the Hegelian Dialectic.  Didion then discovered that she was a writer.  She got pictures in her mind. There were pictures of empty space for Play It As It Lays.

Sara Davidson asked “What were the origins for the book A Book of Common Prayer?”

Her trip to Latin America and seeing the politics and the revolution.  (13)

Susan Stamberg asked about Slouching Toward Bethlehem. Didion talked about Height-Ashbury and the Summer of ’67 or The Summer of Love.  She wanted to explore the danger of drugs and how a baby got burned because no one was there in time (because they were high).

Writers are always selling somebody out.

Joan creates bleak landscapes, desolate.  She is attracted to the underside of the tapestry—the unexamined lives. (27)

Michelle Kakutani writes about how California belongs to Joan Didion. Joan is small and looks fragile, but she is fierce and tough.  California must have been Eden to the first settlers Joan is the Kafka of Brentwood, though she is usually a cheerful person.  Didion says that her women characters don’t have specific problems. They have general problems. (32)

Points West: Then and Now: The Fiction of Joan Didion:

Jennifer Brady talks about how Didion was influence by John Cheever’s The “Tragic Obsolesce.” Didion has a Paradise Lost in her books. (42)

The Central Question of Didion’s fiction is “How exactly did we get from there to here? (51)

Characters of Run River are imprisoned in the memory of things past, attempting to elucidate their sense of change and loss their use of historical figures. (52)

Maria’s abortion is symbolic of Maria’s effort to order her life by “cutting clean.”

Play It As It Lays ironically supports Conservative values by showing their utter absence in the character’s lives. We see a Hollywood society with no sense of history, no sense of the liks between then and now, and we watch this world disintegrate into suicides, abortion, sexual promiscuity and divorce.  It disintegrates into neurotic lethargy—into nada.

Play It As It Lays is about obsessive memory

A Book of Common Prayer explores and interrelates both possibilities through its use of the two protagonists.

Book of Common Prayer’s Landscape is Boca Grande. It is a symbolic landscape and functions as the epitome of entrapment in the nation’s misdirected dream. It is the heart of darkness awaiting on the frontier for the exiles.  Boca Grande is a country lacking a record of its past. (55)

The Limits of History in the Novels of Joan Didion

Thomas Mallon says that Joan Didion admitted, “Predisposition for the extreme and gothic trappings of her imagination. (60)

Narrative Technique and the Theme of Historical Continuity in the Novels of Joan Didion:

Leonard Wilcox talks about the simultaneous sense of exile from and paralysis by the past, the break up an order, a loss of historical coherence. All experiences of the 40s and 50s constitute critical aspects of the California experience. This 40s and 50s and the disconnect from them informs Didion’s Literary Imagination. (68)

Height-Asbury is the center of Counter-Culture in the 60s. The counterculture is a symbol of the fall from an intact historical discontinuity or social hemorrhaging.

Obsessed with the past, with culture obsolesce and historical loss, Didon’s novels and essays keep returning to the question of “Where has the trial been lost?” (69)

Didion’s Protagonists are often pursuing an El Dorado of the mind—one that is free of time and memory. (70)

Each of Didion’s novels, “is an attempt at traveling backwards in search of various historical explanations.” (71)

Abortion in Play It As It Lays: Source of Accumulated Guilt, Severance from the Past, from Purpose. Her past no longer ads up. Abortion revolves around repressed memories and becomes the root of her despair. (73)

The Didion Sensibility: An Analysis by Ellen G Friedman

Existentialism in her works include influences by Sartre, Camus, and Kierkegaard. The influence is Nihilistic and Mythic.

Like the existentialists, Didion sees no hope for the meaning of existence in the way that the world is organized. For her, the world is atomized. As she puts in The White Album, there is no narrative. There is no God, no dependable system governing the social order. She shares the existentialists sense of sickness and dread, but she does not believe in their, or in any, general cure.  Indeed, compared with Didion, Camus and Sartre are foolish optimists. (81)

She is even more severe in some ways—to leap to another sphere—than that apostate of the self-pitying and angry and hopelessness of Sylvia Plath, who reduced to world to self and then was accused, justifiably, those to tried to enter that world, of being a fascist, of being Daddy and suffocating her being. (82)

Didion’s heroines, on the other hand, have a less secure sense of self than Plath’s personae generally have. The Didion world is in fragments rather than reduced to an isolated self.

Kierkegaard’s ideas in either/or concerning the aesthetic and the ethical existences are useful to an understanding of Didion’s sensibilities. (84)

Maria is driven by Kierkegaard’s aesthetic mode. “Immediate pleasure seems to its sole imperative.”  Kierkegaard’s options are not available to Maria. Maria cannot choose to organize the universe meaningfully.  Didion has not faith in universal systems—even God.  (85)

The White Album’s first lines are, “We tell ourselves stories in order to live.” (87)

Didion’s work mirrors a melancholy and deprived world, a world that is without joy, suspicious of good works and optimism. As she says of herself, “You are getting a woman who somewhere along the line misplaced whatever faith she ever had in the social contract in the ameliorative principle in the whole grand pattern of human endeavor. (In the Islands).  Didion’s is the most depressing writing I know. It is also among the truest and most brilliant. (90)

River Eden is home of the wounded Fisher King.

Man and Wife by Robert Lowell. Tragic course of the marriage of Lily Knight and Evert McClellan.

All three of the novel’s major characters idealize their children as an Edenic time of unconditional love and total freedom from pain or danger. (95)

The line between childhood fantasy and adult responsibility is indicated in Run River by the image of the mythic terms representing the loss of Eden. (96)

TS Elliot’s The Wasteland is influential. The abortion is both a cause and a symptom of the wasteland inside of them and around them. The imagery of water, fire, aridity and heat from which there is not shelter is there as it is in The Wasteland.

Death by Water: 3 people die by Drowning in Run River.

Didion, in the oldest traditions of European and American Literature and establishes her “religion” as that of the human spirit. (104) 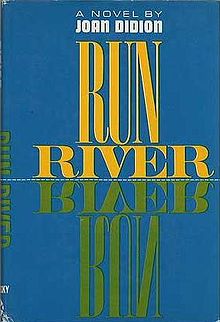 Nothingness and Beyond: Joan’s Play It As It Lays by David J Geherin

Maria dreams of a snake and coils her food like a snake. The symbol of evil is the snake. (108)

Comparison to Sylvia Plath and The Bell Jar. (110)

Myth of Sisyphus is a surrender to meaningless 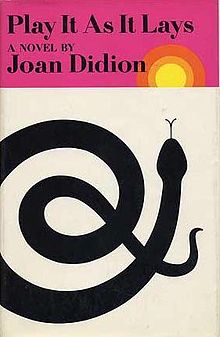 A Taught Novel of Disorder by Joyce Carol Oates

Slouching Toward Bethlehem and A Book of Common Prayer

Joan Didion and Her Characters by John Romano

Passion and Delusion in A Book of Common Prayer

Why? Why Not?  (Slouching Toward Bethlehem, Play and Book mentioned)

Compared to The Great Gatsby and Heart of Darkness.

Against Interpretation: Narrative Strategy in A Book of Common Prayer

Joan Didion’s novels and works of nonfiction are about people, usually women, whose lines are tangled and troubled.

In all her work, Didion is obsessively fascinated with the interpretation of facts, events and the lives of people.  Over and over, in different ways, she must ask, What does mean?

Great Gatsby and Lord Jim.  Like Fitzgerald, Joan Didion has created a novel in which the narrator encounters a series of revelations about the central characters.  (175)

The Album of Anxiety 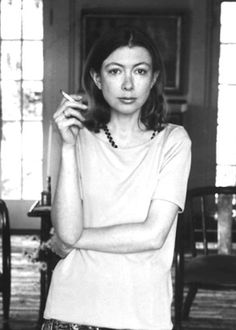 Reading and writing and writing about reading are my passion. I've been keeping a journal since I was 14. I also write fiction and poetry. I published my first collection of short stories, "Radiant Darkness" in 2000. I followed that up with my first collection of poetry in 2001 called "Journey without a Map." In 2008, I published "Persephone's Echo" another collection of poetry. Since then I've also published Emotional Espionage, The Way The Story Ended, My Perfect Drug and Out There. I have my BA in English from The Ohio State University at Mansfield and my MA in English Lit from The University of North Carolina at Greensboro. I also have my Post BA Certificate in Women's Studies. I am the mother of two beautiful children. :-)
View all posts by carilynn27 →
This entry was posted in Culture, History, Literary Criticism, Literature/Pop Culture and tagged 1967, 60s, abortion, Anna Karenina, Boca Grande, California, Camus, Dark Side, Death, Depression, Despair, disconnect, Eden, Edenic, El Dorado, Ellen G Friedman, empty, Evert McClella, excess, Exiles, Existentialism, Fantasy, Griffin Wolff, Guilt, Heart of Darkness, Height-Asbury, Hemingway, Hester Prynne, High, historical loss, History, Hollywood, imprisoned, indulge, Jennifer Brady, Jim Morrison, Joan Didion: Essays and Conversations Edited by G. Friedman, John Cheever, John Gregory Dunne, Joseph Conrad, Joyce Carol Oates, Keirkgaard, Lacking, Landscape, Lily Knight, Literary Imagination, Loss, Lost Paradise, Madam Bovary, Meaningless, Michelle Kakutani, Mind, Misdirected Dream, Nathaniel Hawthorne, Nihilism, no faith, No God, Party, Play It As It Lays, problems, Romantic Degradation, Run River Run, San Fransisco, Severance from the Past, Slouching Toward Bethlehem, society, Southern California, Stuck, Susan Stramburg, Sylvia Plath, The Bell Jar, the break up an order, The Myth of Sisyphus, The Scarlett Letter, The Self, The Summer of Love, The Wasteland, The White Album, time, Timeless, Tragic Obsolence, Trapped, TS Elliot, usually women, Victor Strandlberg, whose lines are tangled and troubled. In all her work, Willa Cather. Bookmark the permalink.