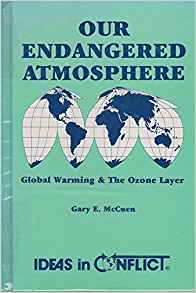 Several major scientific reports have been published on this issues.  The Department of Energy Review, NASA and several foreign agencies agree.

Conclusion: The human condition may depend on the ability of governments to implement policies to reduce the risks before the full extent of the damage becomes apparent. If we don’t act now, it may be too late to reverse or stop the damage.

Both Greenhouse Gasses and Ozone Modification are now accepted phenomenon.  We already have empirical evidence and proof to support these occurrences.  The issue is no whether it happens, but WHEN it happens.

Conventional approaches to problem solving are inadequate to address what we are talking about. Cost and Benefits don’t apply. We must place these issues much higher on the world’s agenda.  International Leadership can’t do it alone.

We cannot afford to give chemicals the same constitutional rights that we enjoy under the law. Chemicals are NOT innocent until proven guilty. There is a very real possibility that man, through ignorance or indifference or both, that we have altered to atmosphere irreversibly. It may one day no longer be able to support life…

Those who believe that these are problems to be dealt with by future generation are misleading themselves. Man’s activities to date may have already committed us to some level of a higher temperature.

The pathway of society is following today is much like a car driving toward the edge of a cliff.  We have a choice to go ahead and take NO action and drive off the cliff and figuring that we won’t hit the bottom until our generation is long gone.  Or we can take action before we get to the point of no return.

The Atmosphere buildup of Carbon Dioxide could cause serious climate changes in the next century, but there is no basis for panic or a precipitous change in Energy Policy says the National Academy of Sciences.  The 500 page report on the Greenhouse Effect takes a less pessimistic view than another study released this week.  The EPA’s estimates of rising oceans and warm climates were similar to The Academy of Sciences. However, the EPA warned that the consequences could be catastrophic unless the world begins planning with a sense of urgency.

Thomas F Malone who gave testimony before the House Subcommittee on Investigation and Oversight in February of 1984.  He suggested that immediate action be taken. We need to slow the growth in Greenhouse Gases and find a more efficient way of getting our energy needs met. We need to act to preserve forests and try to slow the rate of deforestation.  We must increase the support for research on the ecological impact of these gases, global warming and climate change.  We must slow air pollution and reduce emissions.

The United States should immediately develop policy alternatives for Greenhouse Gases emissions.  We must massively increase support for Climate Change Research.  We must push for limits on Chlorofluorocarbons pollution. We must encourage attendance at the 87 Convention and attend to the long overdue alleviation of local pollutants, smog and acid rain.

Wallace S Brocka complained that, “We lack the ability to accurately predict the consequences of our actions.”

The depleting of the Ozone and Greenhouse Gases are connected issues.  The same gases that deplete the Ozone also contribute to Global Warming.

The Associated Press ran a story in June of 1986 that said that pollution was Hostile to Human Life.  “A dramatic reduction in the vital ozone layer over Antarctica proves the Greenhouse Effect is REAL and that a gradual warming would raise the ocean levels, erode coastal cities, bring dustbowl conditions to other areas, increase human misery and if not checked, lead to the eventual extinction of the human species” warned Scientists.

Tropical Rain Forests and the Atmosphere by Jose A Lutzen. “Every single adult Brazilian Nut tree left in peace can produce hundreds of kilos of precious food. Every palm tree or rather any number of the other species of palm trees in the Rain Forest can produce dozens of kilos of food and produce oxygen for the world. Not to mention proving construction materials. Brazil’s policies on the Amazon must change and they must change during the 80s or it may be too late!

Carl Wursch gave testimony before the Senate Committee on The Environment and The Public.  “Co2 build up in the air depletes the nutrients of plants and animals on the surface of the earth.

“The most significant impact of higher sea levels will be the submergence of coastal wetlands. Inter-tidal salt marshes can adapt only to relatively moderate rates of sea level rising.  Rapid increase in sea levels can literally drown these wet lands, converting them to simply shallow bodies of open water.”

If the Earth had its present albedo but had no atmosphere, the temperature would be well below the freezing point.  This planet would, in fact, be uninhabitable.  It is the Greenhouse Effect that brings the Earth well above the freezing point and permits oceans and bodies of water and all of that.  What happens though, is a kind of equilibrium is established so that the amount of sunlight coming from the sun that is absorbed by the plant is precariously balanced by the amount of inferred radiation admitted by the planet back into space,” says Carl Sagan.

Fossil fuels mean more carbon dioxide in the air then normal.  Doubling Co2 will increase the global temperature by a few degrees centigrade. That doesn’t seem like much, but it will upset this delicate balance.  We’re pushing and pulling on the global environment add there is no current instruction to systematically seek out and study such effects. (In 1987).

CO2 might warm the earth and ocean as well as change precipitation regionally and seasonally.  It might affect weather on a larger scale and we don’t know how this will effect humankind over the years ~ John R Justice on a report to the House Committee on Carbon Dioxide and Global Warming

Reading and writing and writing about reading are my passion. I've been keeping a journal since I was 14. I also write fiction and poetry. I published my first collection of short stories, "Radiant Darkness" in 2000. I followed that up with my first collection of poetry in 2001 called "Journey without a Map." In 2008, I published "Persephone's Echo" another collection of poetry. Since then I've also published Emotional Espionage, The Way The Story Ended, My Perfect Drug and Out There. I have my BA in English from The Ohio State University at Mansfield and my MA in English Lit from The University of North Carolina at Greensboro. I also have my Post BA Certificate in Women's Studies. I am the mother of two beautiful children. :-)
View all posts by carilynn27 →
This entry was posted in Biology, Culture, Environment, Politics/Economics, Science/Philosophy and tagged 1984, 1987, carbon dioxide, Carl Wursch, CFCs, Chemicals, Climate Change, CO2, constitutional rights, Cost and Benefit, Damage, Danger, Deforestation, driving toward the edge of a cliff, environmental, Environmentalism, EPA, estimate, evaluate, Evidence, expand, Future Generations, Gary E McCuen, gases, Global Warming, Greenhouse Gases, Groups, Human Condition, Ice Melting, Ideas in Conflict, immune system suppression, International Leadership, Man, methane, modification, NASA, Oceans Rise, Optimism, ore-industrial, Our Endangered Atmosphere, Ozone Depletion, Panic, Pessimism, post-industrial, Re-Forestation, Reduction, Research, reverse damage, Risk, scenarios, Senate House Committee, Series, Skin Cancer, society, Stephen P Leatherman, Strategies for Mitigating The Effects of Global Warming, study, support, Temperature Increase, The Department of Energy Review, The National Academy of Sciences, Thomas F Malone, Tropical Rain Forests, United States, Wallace S Brocka, World. Bookmark the permalink.