$2.00 A Day: Living on Almost Nothing In America

$2.00 A Day: Living On Almost Nothing In America

After the Civil War in the 1870s, Aid was created for the Windows of the War.  That was about all that was available until the Great Depression in the 1930s.  Then the Aid for Dependent Children was created—also known as ADC.  ADC took a backseat to creation of Social Security for the disabled and elderly in 1935.

The few thousand who received aid rose from a few thousand to 3.6 Million in 1962. However, aid was largely segregated. Blacks didn’t receive near as much aid as their white counterparts. Teen mothers were discouraged from applying.  Then the book The Other America: Poverty in America came out in 1962, bringing attention to all of these issues.

President Lyndon Johnson declared war on Poverty in 1964.  In the 1970s Richard Nixon created the Food Stamp program.  Reduced and Free Lunches Programs were also put in place.  AFDC or Aid to Families of Dependent Children created.  The number of people on Welfare jumped from 4.2 Million to 11.3 Million largely because they were now including more minorities and single mothers. The NWRO or National Welfare Rights Organization was responsible for getting aid for more people.  They did away with stupid White Glove Tests and unfair decisions making processes.

Ronald Regan ran in 1976, but lost.  In 1980, he won the Presidency.  He made a famous speech about The Welfare Queen who was his villain. She was black and decked out in furs and driving a Cadillac to appointments. The truth was that more white families received welfare than black families.  Regan was influenced by Losing Ground by Charles Murry, who was a Libertarian.  He believed that the poor were going to remain poor as long as we kept giving them handouts.  In his opinion, welfare didn’t lift the poor up. It kept them down. It was our duty to help them escape the spider web of dependency. However, studies done in 80s showed that most Welfare users were on Welfare temporarily for two years or so.  They were not lifelong users and abusers of the system. 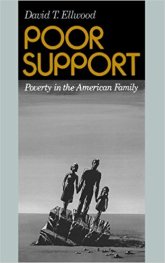 Bill Clinton ran for President on the platform of creating Welfare Reform.  This made him more popular and perhaps got him elected.  He wasn’t offering a hand up or handout. Instead, he offered a hand off.  1995 saw the proposal for Welfare Reform. By 1996, it had been approved.  Cuts were made to Medicaid and Food Stamps.  No real money was put into training and education.  Mary Jo Bane and Peter Edelman who were in charge of the programs quit after the bill passed.

At first it seemed Welfare Reform was a good thing. Unemployment rates dropped. TANIF or Temporary Aid For Families in Need programs were going unused. However, other problems began popping up.  Low Wage jobs were not helping the poor get ahead.

By 2014, there were a portion of those in poverty who were surviving on SNAP benefits only. The low wage jobs were hard to find and keep.  Most of these low wage jobs required the employee be flexible with their schedule—working evenings and weekends.  When employees try to ask for time off they are often punished by a reduction in hours.  They aren’t fired, but are often forced to quit.  The up and down hours make SNAP benefits difficult to rely on since they are dependent on income.

The Welfare Reform pushed more people to work, but it didn’t improve working conditions or low wages. Minimum wage is $6 to $9 dollars an hour, which isn’t a livable wage. Many workers hope to find a job that pays at least $12 to $13 an hour.  Conditions border on slave labor sometimes.  Minimum Wage workers don’t get sick days, health insurance or retirement.

Education isn’t always the answer. Those in poverty can afford to go. Those in poverty often have to drop out of high school to work.  There is not enough time in the day to work and go to school—especially if they have children. And an education is NOT a guarantee that they will get a better job.

Many $2 a day families have unstable housing conditions.  They sleep on couches of friends and family members.  Rents have risen faster than inflation.  Wages have dropped while rents have sky rocketed. A Minimum Wage job—even a full time one—is not enough to pay for rent and utilities. Section 8 Housing helps, but only a handful of people. There are waiting lists in bigger cities ranging from 85,000 to 268,000.  Landlords buy up cheap housing, but can’t afford to fix them up and maintain them. Many abandon houses and move on to other houses in the neighborhood.

Abuse is unfortunately common in the USA. However, it is much more common among $2 a day families.  Why? Because if a family stays with friends or families it increases the likelihood of verbal, physical and sexual abuse.

The poor have to employ Survival Strategies. They seek out Public Help other than SNAP or Welfare.  They make use of Private Charities and Food Pantries.  The Salvation Army, Goodwill and Catholic Charities are the major players.  They find School Supply Give Aways and Utilize Public Libraries. The find Medical and Dental Clinics that offer free services, but have to wait in line for hours—sometimes a whole day without being seeing.  They also find creative ways to generate income like collecting scrap metals and selling them or selling their plasma.  In the end, they often just have to find a way to make do with less.

Prostitution is another way to make money, but it isn’t often as cut and dry as selling one’s self for sex on the street corner. It is often doing sexual favors in return for someone allowing you stay with them or in return for them paying a bill or two.

In Poor Support, Ellwood said that any Welfare or Aid Programs must be in alignment with American Values. He says we must not just reform Welfare, but replace it with a better program. Programs must promote Autonomy of the Individual, which means those on Welfare must feel like they have some power over their lives.  Americans must have a program that promotes the Virture of Work. Americans need opportunities not just handouts.  The truth is most Americans want to work. They don’t like taking handouts and feeling dependent on other people.  Family is very important to the American.  This means help should be designed to keep families together, not tear them apart.  Americans also crave a sense of community.  They don’t like feeling isolated by their financial problems.

Although TANIF is still available to poor families, many don’t realize it or don’t think it is worth it. Generally cash benefits require proof of intensive jobs searches—up to 30 hours a week—which can take time out of taking care of their families and making money in other ways.  They may be subjected to job training that doesn’t result in them getting a job at all.  Not Graduating High School or Felony Convictions or even being the wrong race can prevent the poor from getting good jobs or any job at all.

In order to lift up the $2 a day poor Work Support is Key.  Offering help with dependable transportation and childcare is another important way to make sure the impoverished can not only get jobs, but keep them.  Wages need to be raised to at least $10 an hour at least, but $15 an hour is preferable.  Hours should be guaranteed. Employers should be forced to give full time employees at least 35 hours a week and part time employees at least 25 hours a week. Business can still turn a profit and treat their employees well!  Also, creative ways to employee partially disabled workers would be desirable as well.

Solving the housing issues the plague the impoverished is key as well. The poor need a place to call their own that is physically dangerous.  Right now subsidized housing is our best bet. There are already some places available, but more of these would help greatly.

Reading and writing and writing about reading are my passion. I've been keeping a journal since I was 14. I also write fiction and poetry. I published my first collection of short stories, "Radiant Darkness" in 2000. I followed that up with my first collection of poetry in 2001 called "Journey without a Map." In 2008, I published "Persephone's Echo" another collection of poetry. Since then I've also published Emotional Espionage, The Way The Story Ended, My Perfect Drug and Out There. I have my BA in English from The Ohio State University at Mansfield and my MA in English Lit from The University of North Carolina at Greensboro. I also have my Post BA Certificate in Women's Studies. I am the mother of two beautiful children. :-)
View all posts by carilynn27 →
This entry was posted in Culture, Health, History, Politics/Economics and tagged $2.00 A Day, 1962, 1964, 1996, 2015, ADC, AFDC, Aid to Families of Dependent Children, Aid To War Widows, Benefits, Bill Clinton, Civil War, David Ellwood, Families, Food Stamps, Impoverished, Katheryn J Edin, Living On Almost Nothing in America, Luke Schaefer, Lyndon Johnson, Medicaid, Mothers, NWRO, Poor, Poor Support, Poverty, Racism, Reduced and Free Lunches, Richard Nixon, Ronald Regan, Segragation, Single Mothers, SNAP, Social Security, TANIF, The Great Depression, The Great Recession, The Other America, Villain, Welfare Queen, Welfare Support, Welfare to Work, Working Poor. Bookmark the permalink.