In the introduction to her book Quart overviews the reasons why Families Can’t Afford America any longer. Student Loans and Medical Debt are a huge issue for Generation X and Millennials. Over 65% of Americans worry about their monthly bills. The Middle Class is 30% more expensive than it was in 1996.

Precariat is a term coined by Guy Standing. It term that refers to social class formed by people suffering from precarity, which is a condition of existence without predictability or security, affecting material or psychological welfare. The term is a portmanteau obtained by merging precarious with proletariat. For example, long term careers are now rare. Most people end up with short term jobs that keep changing. Most of the work available today is shift work or adjunct or contract work.

The USA one of the richest country in the world, but there is a huge gap between the wealthy and the poor with a a quickly disappearing Middle Class.

Here are some reasons why Americans are struggling:

Chapter 1: Inconceivable discusses pregnancy discrimination in the work force. There is also discrimination against mothers and fathers who act as the primary care giver for their children. Mothers make $11,000 less than their childless peers. Fathers are also penalized for taking Paternity leave or taking care of their children. There was a famous case Freyer vs Frontier Airlines due to the lack of encouragement or lack of accessibility for nursing mothers. FMLA or the Family Medical Leave Act helps and legally gives mothers 12 weeks of Maternity Leave. However, unlike the rest of the world, Maternity Leave in the US is largely UNPAID.  John Williams talks about the “Maternity Wall” that women run up against. There are legal loopholes that lawyers have utilized to get around the FMLA.

Chapter 2: Hypereducated discusses how Americans with Higher Education degrees are unable to make ends meet. Many who have a MA or PhD remain adjunct professors with no office and no health benefits. Many adjuncts are forced to rely on Foods Stamps and Medicaid—at least for Summer Term. Adjuncts generally make less than $24,000 a year on average. The professor she interviewed had exactly $55 in her bank account with $3,000 in credit card debt and rent on her 2 bedroom apartment in the Chicago Suburbs was $975 a month. The professor shopped at Goodwill despite feeling like she should wear more expensive clothes that were name brand. MA and PhD holders are generally downward mobile in today’s society. Adjuncts found that their parents were better off despite having a lower level of education.

In 1975 over 45% of College Faculty were Tenured. In 2011 just 24% of College Faculty were Tenured.  That means only 1 in 6 Professors will ever get Tenure. And English and History Students/Professors have it the worst. But Lawyers and Law Professor are catching up. Do what you love is lie these days. There is a huge rush away from the humanities and toward Science and Trade Schools. The market has become oversaturated due to years of everyone being told to go to College.

There has been a movement to Unionize Adjunct Professors. Frusicone and Bolin are two former adjuncts who are working to create a better opportunities and benefits for their kind. They created 5EIU. Also check out Linda Tirado’s book Hand To Mouth for more info on this topic!

Chapter 3: Extreme Day Care explores the need for working parents to take care of their children and how expensive it is. There are very few 24 hour Day Care Centers despite many of the parents working at places that have 24 work days and several shifts. Parents no longer for 9-5, but are expected to work various shifts and irregular hours. The cost to hire a babysitter or pay for Day Care is more than a Minimum Wage worker can afford.

Check out the books “We Believe The Children: The Moral Panic of the 1980s” by Richard Beck. He proposes that the child abuse allegations of the 80s were a backlash against women going to work or feminism.  Also check out “The Outsourced Self” by Artie Hochschild, which also explores the degradation of Child Care or Day Care as a profession.

Jeremy Rifkin explores the idea of Hyper-Capitalism. Our crazy unregulated or unfettered free market has created unique problems here in the USA. Workers in the USA are essentially prisoners of love. They need to work to provide for their families, so their bosses take advantage of them. Bosses know they can manipulate low-income employees who feel like they have very few or no other options. Many of the jobs are demeaning in the first place and are looked upon as mere women’s work anyways.

The truth is Pre-K or Preschool is important, but not everybody can afford it. Not all mothers can afford a private program and not all states/cities off Headstart Programs for low-income families. If a family can’t put their child in preschool or day care, it can cause the child to fall behind or have issues. We need to make sure all families have access to Pre-K Education.

Chapter 4: Outclassed explore our Consumerism Culture. People with Assets still feel like they are struggling to keep up with their friends, neighbors and people on TV. They are often referred to as the “Poor Bourgeois” or having the “Poor Bourgeois” mindset.  Quart talks about a mother had to explain to her child about having to chose between Love and No Money or Money and No Love.

Chapter 5: The Nanny’s Struggle explores how child care workers are not making enough money either. A Day Care Center will pay the average worker Minimum Wage or just above. Most Nannies make less than $13 an hour, which isn’t a lot. An immigration worker who used to be able to rely on working in child care now faces having to fund their education and certification on little or no income. Check out “Raising Brooklyn” by Tamara Mose Brown for more on this topic.

Chapter 6: Uber-Dads talks about how it is not just women struggling to make ends meet. Many fathers have to take second jobs. They moonlight as Pizza Delivery Drivers or Uber Drivers. $69,000 a year seems like a decent amount of money, but one Dad she interviewed found it just wasn’t enough when their rent went up but their income did not. They lived in a neighborhood that had  $680,000 to 1.5 Million Dollar homes. They thought about moving, but he decided to stay put and get a second job to help out instead. Check out the book “Raw Deal: How The Uber Economy and Runaway Capitalism Are Screwing American Workers” by Steven Hill for more on this topic.

Chapter 7: The Second Act Industry discusses the Do-Over Myth. Many Americans go back to school to retrain for second career. However, they are finding that going back to school is getting increasingly difficult. Many Americans over 30 have astounding student loan debt and are hesitant to add to it. As student loan debt rises, the buying of houses falls. There is a direct correlation between student loan debt the lack of money to buy a house. Starting a new career generally hurts Americans more than it helps them. Restarting or Rebooting their careers can be costly and it doesn’t always pay off.

Chapter 8: Squeezed Houses explores the problem of inflation—particularly the inflation of rent and mortgages. Apartments are now $1,200 to $3,000 if you live in bigger city. People are trying to get creative in dealing with the problem of rent. They are more open to living with one or more roommates and having commune-like arrangements for chores and childcare.

Chapter 9: The Rise of 1% Television addresses televisions role in American’s unrealistic expectations. Recently we have been treated to viewing a slice of life of the rich and famous—not the Middle Class. Ozark, Breaking Bad, Billions and Empire all show how crime pays and how wonderful people live who got their money dishonestly. Downtown Abbey and Upstairs/Downstairs are British Programs that show the rich and their servants. Real House Wives, The Kardashians, The Apprentice and other so-called Reality shows show how the Upper Class Live only. The Wire, The Sopranos and Mad Men also show how those who have no financial problems live. These shows are far more prevalent than shows like Rosanne or The Middle, which show either working class or middle class people.

Chapter 10: Squeezed by Robots talks about the rise of technology and how it is replacing many of the menial jobs people have relied on for income. Robots are set to replace the hospital staffer that runs errands and even truck drivers.  Self-checkout lanes, kiosks and robots are meant to save employers money. And while they don’t have to pay a wage or benefits to a computer—the initial investment can be costly.  Forbes Runs an Apples Top 10 Articles, which is computer generated. Are writers even being replaced now? Check out the Ray Bradbury short story, “There Will Come Soft Rains.”  The 1950 story is about a computer run house and is chilling to read in this day and age of Siri and Alexa!

Conclusion: The Secret Life of Inequality discusses how there is some aid available and how Quart sees some possible solutions to all these problems. The child tax credit is a positive thing for struggling families. We need to stop the blame game though. Most Americans suffer extreme guilt over failing to provide for their families or they have extreme anger at others for preventing them from succeeding. It would be helpful to education the general public on Class and Social Issues that many fail to understand. Above all, we need to find a way to stop penalizing parents for having kids and wanting to spend time with them! 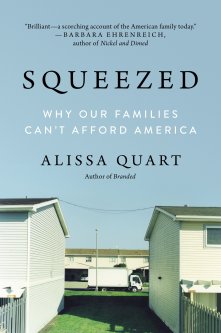