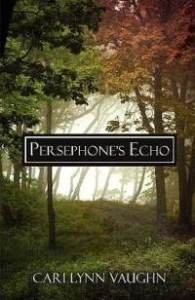 This collection of poetry, Persephone’s Echo, is about the echoes of the past in both mythology and my personal life. This collection combines the Jungian archetype with Sylvia Plath like confession. It also combines the personal with political. The topics are traditional yet told with an intensely emotionally slant. Although each poem tells a story unto itself, they are each part of a larger story. In order to experience the full power of the poems they should be read in context with the others.

The title Persephone’s Echo refers not only to the echoes of the past, but to Greek Mythology as well. Echo was a beautiful nymph who was a favorite of Artemis. Echo had one weakness, her love of talking. Now Zeus’s weakness was women and he often came down from Mount Olympus to cheat on his wife Hera. Echo would often detain the curious Hera by talking to her until Zeus returned from one of his trysts. Realizing she had been deceived, Hera cursed Echo. Echo would get her wish to get the last word, but she could never again have the power to speak first. After Hera left her to repeat only other people’s words, Echo fell in love with the beautiful Narcissus. Narcissus was a beautiful, but vain young man. He mistook her voice for his own and could not properly return her love. Echo withered away in misery until all that was left of her was voice.

Although Persephone best represents my personal journey, it is Echo who best represents the spirit of these pieces. I find that I am cursed by my ability to get the last word, but never be able to change the past. Narcissus best embodies the subjects of my poems; therefore Echo best embodies my effort to voice these thoughts and feelings. Unlike Echo, I will not wither away. I will persevere and publish these poems instead. My power comes from sharing my journey and experiences, and in that way, my voice does retain some capacity for transformation.

The prologue frames the rest of the poems as a journey of self-knowledge and academic intellect. I convey through the poems in the prologue that you will need to know Greek history as well as my own personal history to decode the poems. I discuss the idea of Hermeneutics as a sort key to unlocking the secrets of my poems.

Hermeneutics centers on the study and interpretation of texts. It encompasses the idea of seeing the text from someone else’s point of view and understanding all of environmental factors that went into creating a particular text. The social, cultural and psychological forces behind the words can be seen as part of the subtext or the unwritten meaning. Hermeneutics often enlists the help of parables and metaphors in order to convey meaning. At its most cryptic, Hermeneutics can be a circle or a sealed set of symbols that one needs to know in order to interpret a specific text like the Torah or the Bible.

Having said all that, Part 1 chronicles the journey of Persephone, who is my alter ego. In Greek Mythology, Persephone is the daughter of Demeter and Zeus. She was kidnapped by Hades and made Queen of the Underworld. Her mother was so distraught that the world withered and died into winter. Eventually Demeter convinces Zeus to send Hermes (in some versions it is Iris) to fetch her daughter back. By the time rescue came, poor Persephone had eaten several seeds of the forbidden pomegranate fruit. That meant that she would have to return every year to see her husband. In the end, she spent half her time with her mother and half her time with her husband. This caused the four seasons to take place.

My personal journey is a long and complicated one. In order to deconstruct my words you must know a few things. My life was relative of Garden of Eden until it was shattered at age twelve. I lived in blissful ignorance of the cruelty and hatred of the world outside my own. I was content to read fairy tales and myths and play pretend. I lived under the protection of my mother who was very much Demeter. It was at age twelve that I was ripped from my mother’s loving arms and forced to visit my estranged father out West. My mother and father were divorced before I was a year old and my father left the state not too long after that. He was a virtual stranger to me. When he took my mother to court to force me to fly several hundred miles to see him, I was scared. I was adamant about not going, but neither my father nor the judge heard my cries. My visit with my father was transformed into Persephone’s journey to the underworld. My boating trip down the Rio Grande became a trip down the river Styx.

I spent my teen years in the underworld, which is another way of saying I spent my teen years deep in depression. I suffered from panic attacks during school and I even had thoughts of suicide. For many years I did not comprehend why I was so miserable. It wasn’t until I was much older that I realized that being forced into that visit was akin to being abducted or even raped. I eventually came to understand why my father had done what he did and forgive him for being so selfish. Like Persephone, I felt some affection for my captor, but I had still been a prisoner. From the underworld, I experienced my first relationships and first heartbreaks. These turbulent and tragic relationships only added to my depression.

At nineteen, I took a trip to Phoenix, Arizona, to visit relatives. It didn’t escape me that the Phoenix is a symbol of rebirth. Thus, I was reborn. It was a slow process, surfacing from the underworld. Margaret Atwood and Sarah McLaughlin both helped me with this process of transformation though their writing.

The second part of the book is concerned with my odyssey of longing. Though the worst of my depression had passed, I was still struggling with feeling unfulfilled and empty. I found a great relationship with the man who eventually became my husband, but I couldn’t enjoy it as fully as I wanted to due to my unresolved issues. I still had a lot of work to do and a long way to go in order to end my odyssey. This is where I use Odysseus and his journey to symbolize my own. Then I blended in other Greek Mythology to round out the symbolism. Each of the men I choose to resolve my issues with only provided more confusion. I found myself deceived by their labyrinth of lies. As I made my way through the lies, I came to center myself and see things with great clarity. Like Odysseus, I found my way back to my true love after a long journey.

Lastly, I use Greek myth to voice my opinion on feminism and politics. Many of the political poems are scattered throughout, but the largest concentration is at the end. After all of the chaos had cleared, it was much easier to find my voice and use it effectively. Echo is a great persona for addressing the issue of voice or lack thereof.

Many of the themes I found in the Greek Mythology could be applied quite easily to things that go on in modern society. It was fun see the see the synchronicities surface with each new poem. These blends, I believe, are the future of literature. These poems, then, are a message to the masses that it is time to return to our roots and realize that we need a sense of unity. Making myths our own is the perfect way to create a new sense of community, which we so desperately need during this time of disconnection.

Strawberry Field Forever by The Beatles

All Apologies by Nirvana

Bring Me to Life by Evanescence

Here with Me by Dido

I’m No Angel by Dido

Love is a Battlefield by  Pat Benatar

I and I Taja Seville

Building a Mystery by Sarah McLaughlin

Burn for You by Kreo

I See Stars by Robin Fox

The Art of Love by Ovid

Cities of the Interior Anais Nin

A Dark Muse: The History of the Occult by Gary Lachman

The Divine Comedy by Dante

Electra a play by Sophocles

Electra a play by Euripides

The English Patient by Michael Ondaatje

If on a winter’s night a traveler by Italo Calvino

The Iliad by Homer

The Lethe of Heaven by Ursula K LeGuin

Mythology for the Modern Reader by James Wiegel, Jr

The Neverending Story by Michael Ende

No Exit and Other Plays by Sartre

The Odyssey by Homer

The Penelopiad: The Myth of Penelope and Odysseus by Margaret Atwood

The Prisoner of Azkaban by JK Rowling

She Who Remembers Linda Lay Schuler

A Short History of Myth by Karen Armstrong

The Road to Oz by L. Frank Baum