Ballad of Songbirds and Snakes

Ballad of Songbirds and Snakes 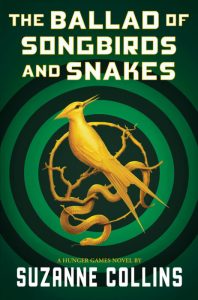 The Ballad of Songbirds and Snakes is the new Hunger Games book by Suzanne Collins. It is a prequel to the original trilogy and follows the rise of President Coriolanus Snow. It is no accident that Collins uses the name Coriolanus for Panem’s leader. Like the rest of the Hunger Games Series, we find Rome—particularly Rome through the eyes of Shakespeare—is always in the subtext.

In the Shakespearean play, Coriolanus is the name given to a Roman general after his military success against various uprisings challenging the government of Rome. Following this success, Coriolanus becomes involved in politics and even takes on political leadership. His personality is not well suited for popular leadership and he is quickly tossed aside.  That is when he aligns himself with powerful allies to set matters straight. The alliances he forges along the way result in his ultimate downfall.

As we follow young Coriolanus, we see a similar pattern of events. Coriolanus takes on a role of leadership as one of the first Mentors in the Hunger Games. His cheating ultimately gets him shipped off to be a part of the Peacekeepers or the Military. Coriolanus aligns himself with Sejanus Plinth and eventually secures his return to the Capitol to begin is rise in politics.

When Dr. Gaul uses the mutant snakes in the Hunger Games Arena, this symbol of the snake is only reinforced. Dr. Gaul is cold and calculating just like a snake. Her words are just venomous. Lucy, however, is somewhat of a snake whisperer, which is perhaps why she has the effect on Coriolanus and Panem that she does.

Anyway, we see that the people in the Capitol did suffer during the rebellion. At the beginning of the book we have some compassion for Coriolanus. We see that his mother and father have both died and that all he has left is is Grandmother and Cousin. Perhaps the Capitol was justified in their anger toward the rebels. However, the Government’s decision to carryout an infinite punishment was, perhaps, overkill.

Dr. Gaul and the Gamemakers are sadistic and follow in the philosophy of Hobbes. Humans are no better than animals when the rules and regulations fall away. Anarchy will always mean chaos. Lucy Grey is a precursor to Katniss. She represents the strength and resilience of the poor people of the districts. She is charming, sweet and a singer. She might best be represented by the Philosophy of Rousseau, at least Coriolanus sees her as more of a Noble Savage.

Coriolanus is young and impressionable. Although he too has suffered, his response is self-serving and ambitious. He is not unaware of the struggle of the people, but he is more motivated by status than what is morally right. Coriolanus may have been a blank slate, in the vein of John Locke. However, his involvement with Dr. Gaul and the Games corrupted him or brought out the worst in his nature, rather than the best.

Reading and writing and writing about reading are my passion. I've been keeping a journal since I was 14. I also write fiction and poetry. I published my first collection of short stories, "Radiant Darkness" in 2000. I followed that up with my first collection of poetry in 2001 called "Journey without a Map." In 2008, I published "Persephone's Echo" another collection of poetry. Since then I've also published Emotional Espionage, The Way The Story Ended, My Perfect Drug and Out There. I have my BA in English from The Ohio State University at Mansfield and my MA in English Lit from The University of North Carolina at Greensboro. I also have my Post BA Certificate in Women's Studies. I am the mother of two beautiful children. :-)
View all posts by carilynn27 →
This entry was posted in Event, Literary Criticism, Literature/Pop Culture, Movies/TV, Poetry, Politics/Economics, Science/Philosophy and tagged Army, Corilanus Snow, Dr. Gaul, Enlightenment Philosophy, Jabberjays, Jean Jacque Rousseau, John Locke, Leadership, Lucy Gray, Lucy Grey, Masks, Mentors, Military Service, Mockingjays, Names Important, Noble Savage, Pandemic, Panem, Peacekeepers, Politics, Public, Romanticism, Romantics, Rome, Sejanus Plinth, Shakespeare, Subtext, Suzanne Collins, The Ballad of Songbirds and Snakes, The Hunger Games, Thomas Hobbes, William Wadworth. Bookmark the permalink.