Tranquility is the symbol on this diary.  Happiness was the symbol of the last, which led me to ponder the difference between the two.  Happiness is defined by the presence of joy and lack of suffering.  Currently there are many things that make me happy.  Jason, the baby, our new apartment, my work….among many other things.  Still, it seems complete and utter satisfaction is difficult to come by or maintain.  Happiness and sadness fluctuate.  To only have one or the other in one’s life is not to have balance in one’s life.

Tranquility, on the other hand, is something that can remain through the ups and downs.  Tranquility is beyond happiness in that it requires acceptance and calmness.  Tranquility is peace of mind.  It is standing still amidst the swiftly moving world. Tranquility is my goal I think.  They key here is tranquility—to let the world speed by us while we take our time.  If we can hold on to our sense of tranquility then we came come through less affected and less stressed.

Take this past weekend for example.  It was supposed to be fun, but it turned out to be quite stressful.  It was difficult remain tranquil with everything that happened. We headed out on Saturday to Blowing Rock and the Blue Ridge Parkway.  Blue Ridge Parkway is 469 miles long and connects the Great Smoky Mountains National Park in North Carolina to the Shenandoah National Park in Virginia.  There are Split-rail fences, old farmsteads, mountain meadows and scenic overlooks with breathtaking views.

Blowing Rock didn’t advertise a charge for admission, so when we got there it was a surprise.  Though we enjoyed the view it wasn’t easy to forget that we couldn’t afford to be doing it really.  I wanted to hike longer, but felt I shouldn’t.  The rain and my sore muscles kept us from exerting ourselves, which was probably for the best.

Anyway, the windy cliffs of the area were home to the Cherokee and 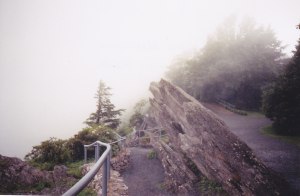 the Catawba Indian tribes and they did NOT get along.  The story of “The “Blowing Rock” is about two star-crossed lovers, one from each tribe, were walking near The Rock when the reddening sky signaled to the brave that he must return to his tribal duty, and the maiden urged him to stay with her. His desperation in choosing between duty and love caused him to leap from the edge of the gorge toward the rocks below, while the maiden beseeched the Great Spirit to bring him back to her. The famous winds of the John’s River Gorge blew her lover back into her arms, and this legend about The Blowing Rock is still told today.

We left Blowing Rock and drove down The Blue Ridge Parkway.  Though Jason wanted to zoom along the curves, the other traffic kept us at 35 miles per hour or so.  It was probably for the best.  We really got to enjoy the awesome scenery.  The slow pace picked up, but not before I realized that Chimney Rock closed at 5:30pm.  Though we couldn’t afford to sped $24 on it either, we had decided to go there anyway.  Both of us grew frustrated as 5:30 drew ever closer.  We still had a ways to go and no one was moving fast enough.  Both of us were hungry and I had to pee.  We should have stopped, but we pressed onward in the hopes of making it on time.

We arrived in the very small, but very small town of Chimney Rock.  We arrived just 5 minutes too late.  The park was closed. 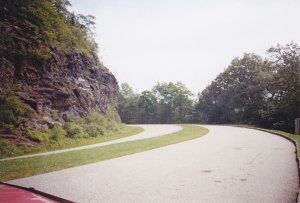 On our way out of town—in Lure—we were pulled over for speeding.  The officer, who was a rookie, gave us a ticket.  He didn’t care that we weren’t from around there and honestly didn’t know the speed limit.  After Jason demanded to see his gun calibration and license, which he declined to show, I walked across the street to the use the restroom.  The woman refused to let me use the restroom, claiming that she didn’t have one and that I couldn’t go out back in the woods to relieve myself either.  Imagine, denying a woman who is clearly six months pregnant a place to go to the bathroom!  How cruel! Angry, I stomped out. Miles and minuets later, when we left the tourist trap town, we stopped at a BP for gas and for me to pee.  Ah! Relief at last!

Admittedly, much of the trip sucked, however, the views were spectacular and we got some great pictures.

Reading and writing and writing about reading are my passion. I've been keeping a journal since I was 14. I also write fiction and poetry. I published my first collection of short stories, "Radiant Darkness" in 2000. I followed that up with my first collection of poetry in 2001 called "Journey without a Map." In 2008, I published "Persephone's Echo" another collection of poetry. Since then I've also published Emotional Espionage, The Way The Story Ended, My Perfect Drug and Out There. I have my BA in English from The Ohio State University at Mansfield and my MA in English Lit from The University of North Carolina at Greensboro. I also have my Post BA Certificate in Women's Studies. I am the mother of two beautiful children. :-)
View all posts by carilynn27 →
This entry was posted in Travel and tagged Blowing Rock, Blue Ridge Parkway, Cari Lynn Vaughn, Catawba, Cherokee, Chimmney Rock, Great Smoky Mountains National Park, Happiness, Jason Vaughn, John’s River Gorge, Lure, North Carolina, Pregnancy, Speeding Tickets, star-crossed lovers, Tranquilty. Bookmark the permalink.