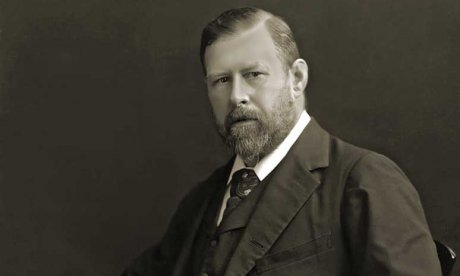 Bram had a frigid wife. He went to prostitutes—especially during the menstruation period.  Bram wanted to grow as a person, but he felt he couldn’t. Bram was aware of the subtext in his own novel Dracula.

Dracula claims Harker in the Castle.  Dracula has a phallic symbol of sharp teeth that penetrate, but never receive. Blood is like semen. Killing Lucy was an orgasmic climax.  Then the Count seduces Mina with Jonathan there in the bed with her.  It was like giving Dracula head with her husband in bed with her.  It was a very taboo act and threatened Jonathan Harker’s manhood.

Stoker was ill often during his childhood.  He didn’t walk around or get out much until he was seven years old.  He always felt like he was at Death’s door.  He was babied and denied his rite of passage.

Evenings in the Stoker household included story time. His name was Abraham, but it was shortened to just Bram. They were a middle class family. He had access to an education. His father worked for the Irish Government. Bram was not into commenting on social ills of the time like other writers.  Bram was later into Rugby and loved his evening walks.

Bram was largely self educated. He debated in lecture halls at the University. He met Oscar Wilde in 1867. Stoker wrote a passionate and emotional letter to Whitman in the US.  Whitman influenced Stoker a great deal.  The Vampire even resembles Whitman a bit.

Bram Stoker’s father died in 1876. He had a surrogate father in Sir William Wilde.  Then Wilde died.  Abraham became Bram.

He went to the London Lyceum Theater.  Irving was greedy and never let his guard down. It was all about control.  There was a lot of Irving in Dracula was as well.  Bram was obsessed with Irving.  Ellen Terry, who was actress there at the Lyceum inspired Mina as well. Ellen Terry married Irving. She allowed her husband to cheat on her, because a divorce would be too much scandal.

Stoker married Florence and they had a son. Irving Noel Thonley Stoker was born on December 31, 1819. Florence refused to have sex after their son was born. Some people speculated that Stoker died of Syphilis, but there is no medical evidence to support this.

In Dracula there was an undercurrent of the Victorian fascination with the occult—séances, crystal balls, tarot cards, etc.

Harker is the Fool

Mina is the Empress

Helsing is the Magician

Seward is the Hermit

Quincy is the Hangman

Lucy and Arthur are The Lovers

Dracula is the Devil

An Account of the Principalities of Wallachia and Moldavia by William Wilkerson gave him the meaning of the word Dracula.

The Ship The Demeter is similar in name to the Dmitry, a Russian Ship that ran aground on October 24, 1885. Tennyson wrote a poem about Demeter in his book Demeter and Other Poems.  Whitby was the ideal setting for Dracula to talk to Lucy.

Lucy’s mother and Author’s deaths embody McHenry, Whitman and Tennyson’s deaths.  Stoker felt all his father figures abandoned him and all that was left was Irving.

Some feel Lucy’s death was anti-feminist.  But Min seems to be a nice new woman who stopped short of achieving pure independence. Unconsciously, it seems, Stoker preferred Lucy wild sexuality to Mina’s prim and proper demeanor.  The blood transfusion given to Lucy is like the exchange of sexual fluids.

Psychic Vampirism in Doyle’s The Parasite influence. In Stoker’s first draft there was a psychic research agent named Singleton.  Fate of Fernella was joke among the characters.

Stoker finished Dracula as Irving was knighted and Wilde was imprisoned.

Vampires are usually bisexual, but Dracula doesn’t appear to be so. He seduced Mina, but he didn’t really do anything to Harker.  It was his women who seduced Harker.

Stage Vampires were in Le Vampire in Paris 1882.

Lucy was like Ophelia or Desdemona in Shakespeare. In Dracula and Othello both have males who suffer from anxiety disorder.

Not sure if Dracula’s Girl Vamps were his daughters or his wives.  Once Dracula turns them into Vamps, he seems to lose interest in them.  In the book Harker recognizes the fair haired one as Countess Dolingen—who was mentioned in the deleted version of the 2nd chapter.

Dracula is not killed by a stake like Lucy.  Kicked by wounds—many of them.  In the original ending the Castle was also destroyed like Poe’s story The Fall of the House of Usher.

No publisher wanted Dracula at first. Finally, Harper/Appleton picked it up. Later, Doubleday and McClure published it in 1899 in America. There were comparisons to Frankenstein, Wuthering Heights, and Poe’s The Fall of the House of Usher. No one admitted the hidden sexual messages in Dracula at the time.

In 1930 the movie Nosferatu was made. Belalogosi’s Dracula came out.

Bram Stoker had been given arsenic for his symptoms. He seemed disoriented before death. Stoker might have had a stroke.

Stoker’s women all had names beginning with M in his stories Maggie, Mimi, Mina and Margaret.  That was because of his Mother and his sisters Matilda and Margaret.

There was a battle over copyrights in the 1930s to Dracula and the movie Nosferatu.

Reading and writing and writing about reading are my passion. I've been keeping a journal since I was 14. I also write fiction and poetry. I published my first collection of short stories, "Radiant Darkness" in 2000. I followed that up with my first collection of poetry in 2001 called "Journey without a Map." In 2008, I published "Persephone's Echo" another collection of poetry. Since then I've also published Emotional Espionage, The Way The Story Ended, My Perfect Drug and Out There. I have my BA in English from The Ohio State University at Mansfield and my MA in English Lit from The University of North Carolina at Greensboro. I also have my Post BA Certificate in Women's Studies. I am the mother of two beautiful children. :-)
View all posts by carilynn27 →
This entry was posted in History, Literary Criticism, Literature/Pop Culture, Movies/TV, Uncategorized and tagged Actor, An Account of the Principalties of Wallachia and Moldavia, Anti-Feminist, Blarney, Blood, Bram Stoker, Byron, childhood, Demeter, Desdemona, Devil, Dracula, Edgar Alan Poe, education, Ellen Terry, Emily Bronte, Empress, Fates of Fernella, Father Figure, Florence, Fool, Government, Hangman, Harker, Ill, Incest, infanticide, Irving, Jonathan, Le Vampires, Lovres, Lucy, M Names, Magician, Mark Twain, MIddle Class, Mina, Movie, Nosferatu, Ophelia, patricide, Research, Sex, Sexual, Shakespeare, Sharp, sibling rivalry, social ills, taboo, tarot cards, Teeth, The Fall of the House of Usher, Theater, Vampires, Victorian, Vlad Dracul, Walt Whitman, Whitby, William Wilkerson, Wuthering Heights. Bookmark the permalink.